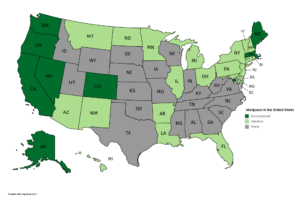 Just because the voters of a state approve the legalization of marijuana, either for medical or recreational use, doesn’t mean that it will become available anytime soon. It can take years for a state to finalize its laws and regulations, and until that happens businesses cannot apply for licenses to operate. If businesses cannot operate then patients and customers can’t legally purchase the products they need, even if they are technically legal to possess and consume in their state. So even though there is a Canada marijuana delivery service, you cannot legally purchase it just yet to your state (even though Canada might be a bit from your home town!)

Many states will vote on whether to legalize marijuana in 2018, but we’ve narrowed our list to 4 states that will actually have marijuana in stores and available for purchase this coming year.

Medical marijuana has been legal in California since 1996 and the laws have been progressively refined since. In 2016 voters passed Proposition 64 which legalized the recreational use of marijuana. However residents of California will have to wait until sometime in 2018 to finally be able to purchase recreational marijuana.

As it stands, the Department of Food & Agriculture and the Bureau of Cannabis Control (the two organizations that oversee marijuana business licensing) will make applications available to business-owners beginning on January 1st 2018. Depending on how quickly regulators move it could take months for the first applicants to receive their licenses and even longer for them to open their doors to the public. But unless the government announces a serious delay in finalizing licensing regulations it’s likely that California residents will be able to purchase recreational marijuana sometime in 2018.

Medical Cannabis became legal in 2016 when House Bill 523 was signed by Governor John Kasich. However patients in Ohio are still unable to obtain the treatment they need for their qualifying medical conditions.

The Medical Marijuana Control Program is still finalizing how they will regulate cultivators, retailers, manufacturers and the application process for business licenses and patient cards. The law states that the system must “…be fully operational by September 2018”. If they are able to meet that deadline, patients will be able to apply for a medical marijuana card at that time and purchase from a medical dispensary soon after.

It’s been over a year since North Dakota voted to legalize medical marijuana but the Department of Health is still developing administrative rules to regulate patient applications. Many of the components are already in place, including application fees, eligibility requirements, qualifying medical conditions and the general application process. The state expects to have the Medical Marijuana Registry program up and running by November of 2018, so it’s likely that they will be working on creating the licensing procedures for cultivators and dispensaries over the coming months. But with so little time left in the year any unexpected delays could mean that patients in North Dakota will have to wait until 2019 to see a dispensary open to the public.

One year after Massachusetts voted to legalize recreational marijuana, the state still has a lot of work left to do. The Cannabis Control Commission has a general outline of regulations that will be in place but there is no official business application process, eligibility requirements or application costs.

The Commission has already announced they will begin to accept business license applications in July of 2018 with preference going to companies that already operate medical dispensaries. If the applications are in fact available during the summer it’s possible that Massachusetts residents will be able to visit a recreational dispensary by the end of 2018. Some communities like Ashland and West Bridgewater have petitioned to delay the sale of recreational marijuana, but if the state Attorney General grants them that delay it will only apply to their jurisdiction and not the state at large.

About The Marijuana License.org :  We are the up-to-date guide to getting a Medical Marijuana Card or Marijuana Business License in Your State.