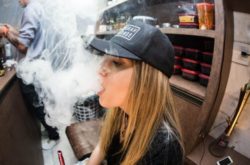 Marijuana vaporization started to become popular once users began to understand the advantages of vaping over smoking weed. Cannabis has always been combustible and suitable for smoking, but new technology means its now possible to vaporize the drug. You can even buy portable pen-sized vaporizers for ultra discrete weed vaping. As we compare the benefits and drawbacks of vaping and smoking, we’ll focus primarily on dry herb vaporizers.

What’s Being Inhaled? Vapor Vs. Smoke

The main thing separating smoke and vapor is combustion. If any combustion happens to your dry herbs, you will no longer be inhaling pure cannabinoids. A study that set out to rank the efficacy of various herbal vaporizers demonstrated just that. During the study, cannabis from the same source was turned into smoke and vapor. It was found that the vapor produced when the herb was vaporized contained a large percentage of cannabinoids and trace quantities of three other chemicals. Meanwhile, the smoke produced during combustion of the herb contained over 111 different compounds, many of which were known toxins.

One benefit of smoking rather than vaping is that the initial upfront costs are lower. That said, over the course of the long-term, a vaporizer can you save you money. A further benefit of smoking weed is that it offers simplicity. Many people find it easier to roll a joint than to remember to carry a vaporizer around with them.

A separate study found that people who vape cannabis are less likely to experience any respiratory problems. So, what are the main advantages of vaping? Vape users can obtain all the positive effects of cannabinoids without having to inhale toxic smoke compounds.

Research conducted at Leiden University found that cannabis users who switched to vaping experienced similar effects to those experienced when smoking the herb with less negative side effects. The amount of THC absorbed into the bloodstream was comparable to the amount absorbed during smoking and vaping had fewer harmful effects on the respiratory system.

Avoiding combustion can also significantly cut down on the smell of cannabis in a user’s immediate surroundings. Consequently, vaporizer users find it easier to take weed unnoticed.

So, why do lots of individuals still choose smoking over vaping?

What are the key benefits of weed vaping?

In terms of reducing damage to your health, opting for vaporization as your chosen method of cannabis inhalation would be a good choice. However, even though more people are now aware of the benefits of vaping, lots of individuals who have tried vaping weed still opt to smoke regularly. This might be because there are a few drawbacks to vaping.

Many vaporizers in the marketplace have steep learning curves, which means they can initially be hard to use. What’s more, you have to pack more than one vaporizer if you want to share weed with friends. Meanwhile, passing a rolled joint around is a super easier way to share cannabis.

The initial investment cost is on one of the main things that puts people off vaporization. The best dry herb portable vaporizers can set you back up to $300. Any device under $100 is unlikely to properly vapourize your dried herbs. You need to think about a vaporizer as a long term investment. This is why a quality device such as Firefly 2 is a good idea.

A large drawback of vaporizers is that they need cleaning. Unlike with smoking cannabis, where you can just throw a joint in the trashcan once it no longer taste like weed, a vaporizer needs to undergo a regular cleaning process to main optimal functionality.

Every time you have finished vaporizing, you need to brush out the chamber. It’s up to you whether you move onto a new pack once the weed becomes yellowish-brown or if you continue to cook it til it’s a dark brown color. A vaporizer also needs to be deep cleaned every couple of weeks because oils can build up in all the tubes.

Desktop vaporizers come in a range of different styles. Some have a water attachments and separate mouthpieces. These extra pieces can make your vaporizing experience better, but they too require cleaning, which increases the inconvenience when compared to smoking.

Portable vaporizers have to be recharged. If you forget to charge your vaporizer or find yourself stuff somewhere without power, your vaporizer will become nothing but a paperweight. In such situations, it’s a lot easier to find a lighter and some papers.

The benefits of weed vaping are mainly stealth and health focused. There are drawbacks to cannabis vaporization that deter many individuals from adopting the vaping process as their main weed consumption method. As vapor technology continues to advance and become more accessible, it’s likely more people with see the benefits and eventually abandon their papers, lighters, and pipes in exchange for a cleaner high.