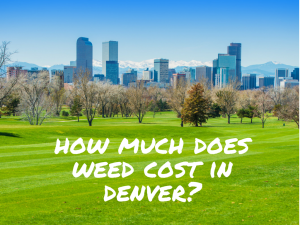 Legalization of recreational marijuana use and sale in Denver has had a profound economic impact on the Mile High City, and much of that has been felt in terms of pricing for pot for personal recreational consumption. A decade ago, for example, an ounce of top-quality illegal weed could be bought on the streets of Denver for about $350.

Then prices fell about 15 percent about five years ago, a change that was precipitated by the advent of medical marijuana dispensaries. Since people could buy legal pot for medical reasons the black market demand shrank and dealers in the black market had to lower their prices. Once weed became legal for recreational use in Denver, black market prices suffered a very significant hit and virtually collapsed.

Weed Pricing is a Complex Calculation

Pricing also has to take into account such peripheral costs as advertising and labeling; labor to create a particular THC-infused concoctions; and the exclusivity or proprietary nature of the product. In Denver you can buy edibles, tinctures, seeds, clones, and even topical ointments that pack a pain relief pot punch. Naturally, a thorough analysis of all of those different kinds of products requires a case-by-case or product-specific examination of the components that go into the final price tag.

Edibles account for nearly half of all sales of marijuana in Denver, for example, but pricing is hard to do without knowing lots of details. That is because you have to establish value across a number of critical factors that can be hard to ascertain. It’s a bit like trying to compare the cost of burgers in Denver, where it all depends on the specific ingredients in the recipe and the chef who prepared it. Is it organic and does it come with a homemade bun and gourmet condiments, or is it just your typical generic burger? Are you buying it as a ground beef patty from a grocery chain to prepare at home, from a neighborhood burger joint, or off of the lunch menu of a fine dining restaurant? As you can see, there are dozens of pricing factors that can influence the retail cost of an edible.

Depending upon what you’re buying the price for the actual THC content will vary, too, and an easy way to understand those market dynamics is to make a comparison to another popular recreational intoxicant industry, the liquor business. You can buy a pint of low quality vodka in a liquor store, for example, and pay less than you’d be charged for one vodka cocktail – containing just a few ounces of vodka – in an upscale bar.

But in the bar you’re paying not just for the vodka and the expertise of the bartender creating that cocktail, but you’re also paying for the convenience, the ambience, and opportunity to be in those swanky surroundings. Likewise, you can buy a bag of weed as a take-out purchase in a no-frills Denver marijuana dispensary and pay less. Or you can opt to hang out in a gorgeously-appointed marijuana boutique where you will be treated to award-winning pot that has been skillfully and elegantly crafted into fine truffles wrapped in a gift box.

Many marijuana businesses also offer discounts for first time customers or for special sales events like those offered on holidays or on slow days when merchants want to increase traffic to their shops. As is customary in many industries, customers may also find that preferential pricing is available to them through partnerships with other businesses.

If you carry a particular credit card, for instance, it may entitle you to discounted hotels and car rentals. Similarly, within the marijuana industry in Denver, if you are part of a particular tour group visiting the city to explore marijuana culture you may have access to discounts or free samples.

The level of THC contained in something like a cookie, brownie, or hard candy is just one of many factors. But a rather reliable way to do “apples-to-apples” comparisons that help control for the extraneous factors is to judge the prices of marijuana buds themselves that are sold by the ounce to those who want to smoke pot. Most marijuana sold for smoking purposes in 2015 is priced from around $150 to $200 per ounce, although that, too, can vary based on quality, popularity, and availability. The economy-priced or bargain basement variety pot can be had for $100-$120 an ounce if you shop hard enough. But those who want gourmet cannabis of the highest grade can expect to pay in the $250-$300 range.

Of course the more you buy, the more inclined retailers are to offer you a cut rate.  But only local legal residents can buy an ounce at a time – whereas visitors and tourists are limited to purchases of a quarter of an ounce of seven grams. There are also lots of marijuana stores that limit each sale to an eighth of an ounce in order to avoid running out of inventory when customers stock up or hoard pot. Taking those variables into consideration, though, you can expect to pay between $35 and $70, including taxes, for an eighth of an ounce at dispensaries in Denver. The average price of weed is around $60-$65 at this time.

State and local officials recently approved tax increases on pot sales, which has added a considerable amount to the retail cost of marijuana. Those include a 15 percent excise tax and a 10 percent sales tax, but in Denver there is also a local sales tax on pot purchases of 3.5 percent, on top of that.

One unintended consequence of this legislation is that it has helped to revive the sale of illegal pot. Right now it is possible to buy black market marijuana without paying the additional tax costs, for example, and the savings are huge. Weed that generally sells for $400 an ounce including taxes can be had for about $300 an ounce on the black market – a discount of 25 percent.

An Increase in Marijuana Harvesting

Another change that should begin to impact the Denver market within the next few months, though, is abundant supply. Many growers got licensed within the past year, and once they have had time to get their crops in the ground and yield a first harvest that could significantly lower wholesale prices for pot. As that supply floods the market to drive down wholesale prices, retailers will likely pass those savings along to consumers.

How big the effect will be on retail pricing remains to be seen, however. If taxes on marijuana continue to add to the price tag, that could effectively undermine whatever potential savings are generated by more farming and a greater supply of product. The bottom line is that if taxes stabilize or fall, competition between growers at the wholesale level could translate into cheaper pot prices in the coming year. But lawmakers are usually reluctant to offer tax breaks if they can avoid it, so for the time being most consumers can expect marijuana prices to remain about where they are right now.