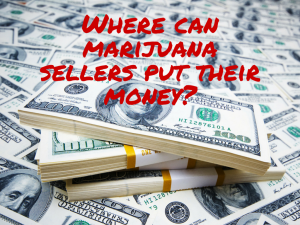 When Colorado led the way by legalizing recreational marijuana, it revolutionized the political landscape and set a precedent for other states – and perhaps the nation – to follow. But it also did wonders for the local economy. The legal pot experiment has proved to be a robust source of revenue for marijuana industry entrepreneurs, other sectors like tourism, and for local and state tax collectors.  One group who has not participated in the prosperity so far, however, is the banking community. That’s a bit strange, since banks are usually in on the ground floor whenever business booms in a particular market, acting as primary facilitators of that success.

The problem is that the banking system in the United States is federally regulated. If you want to store your money in a safe place – especially if you want your deposits to be federally insured – you need a bank or credit union. Because cannabis business violates federal law, federally regulated banks cannot legally accept deposits of funds generated selling marijuana.

While the feds may not actively prosecute marijuana sellers out of respect for Colorado state law, they would not hesitate to come down hard on banks that violated federal regulations. The banks could be charged on a number of counts, including money laundering, and so Denver is at the epicenter of a Catch-22. Lots of money is being made, but that money cannot seem to find a safe and secure home. Lots of pot sellers in Denver are sitting on piles of cash that takes up lots of physical since it cannot be transferred electronically through banks.

The Fourth Corner Credit Union hopes to solve that dilemma by opening up and accepting deposits from businesses in Denver’s marijuana industry. State regulators approved the credit union last fall, so the next step is securing permission to operate from the Federal Reserve. Attorneys for Fourth Corner are hopeful, because the Federal Reserve has a mandate to authorize credit union organizations that have already been granted state charters.

The application was submitted by the credit union to the Kansas City Federal Reserve, because that is the branch that serves the region including Colorado. But most experts believe that the branch will defer to the central office in Washington, because of the sensitivity of the issue and the potential national legal and political ramifications of a credit union organized around the marijuana trade.

United States Senator Michael Bennet likes the idea of opening marijuana industry credit unions in Denver, and he wrote a letter expressing his support to Fed Chair Janet Yellen as well as to the head of the regional branch in Kansas City. But four months have already passed since the application was submitted, and the delay is frustrating for the credit union and for Denver’s marijuana business community.

If the issue is left up to Yellen and her colleagues in D.C., it will likely mean longer delays because they will want to be sure to do plenty of legal due diligence before accepting or rejecting the proposal. In the event that the permit to open the credit union is granted, it could set the stage for other financial institutions, including major banks, to ask for the same opportunity. If permission is denied, that could lead to a confrontation between state and federal authorities.

Another Good Problem to Have

Making lots of money and not knowing where to bank it is a relatively good problem to have, as opposed to having a bank account but not enough income to keep it filled. Another of these unique obstacles faced by pot business owners in Denver is the looming deadline for filing IRS tax returns. Since selling marijuana is against federal law, they risk real trouble if they declare that federally-illegitimate income on a federal tax return. But if they don’t declare it, they could be liable for penalties for tax evasion.

To make matters more complicated, CPA firms do not want to run afoul of the feds, either. So with April 15th right around the corner, many Denver entrepreneurs are not sure what to do. The good news amid all of the confusion is that state authorities are anticipating a windfall of profits from local taxes on marijuana sales. Pot is expected to generate so much extra revenue, in fact, that Colorado may give every taxpayer a small refund or tax credit in order to celebrate the success of the legal marijuana initiative.