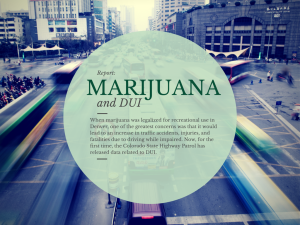 When marijuana was legalized for recreational use in Denver, one of the greatest concerns was that it would lead to an increase in traffic accidents, injuries, and fatalities due to driving while impaired. Now, for the first time, the Colorado State Highway Patrol has released data related to DUI (Driving Under the Influence) or DUID (Driving Under the Influence of Drugs) citations. The good news so far is that traffic fatalities across Colorado fell during 2014, which surprised some experts.

New Data from the Highway Patrol

In its rather extensive annual report, the Colorado State Patrol revealed that more than 12% of the impaired driving citations that it issued in 2014 involved suspicion of marijuana use. In about half of those cases the authorities concluded that marijuana was the sole reason for impairment.

But the numbers may not paint a totally accurate or conclusive picture, some say, because of certain variables that have not yet been isolated for a better, more pure measure of marijuana DUID in Denver and surrounding areas. The law enforcement agency did not share any statistical information, for example, about the amount of marijuana that was present in the blood of those individuals who were cited.

Not only that, but local Denver police data and stats from Colorado sheriff’s departments was not included. Until comprehensive data from all of those agencies has been compiled and analyzed in a location-specific way, it is hard to reach precise conclusions – but it is still possible to generalize the data to arrive at reasonable estimates.

There are still other significant challenges to be met regarding DUID in Denver, however, and one major complication is that data related to DUID is not yet clearly separated from statistics related to driving under the influence of alcohol. Many people who fail sobriety tests, for example, have both THC and alcohol in their systems.

In January of last year that problem gained national attention when Keith Kilbey was arrested for crashing into two highway patrol vehicles in Denver, while high on pot. Law enforcement authorities insinuated that it was a prime example of why driving while stoned was such a dangerous issue. But later the Washington Post criticized those same authorities for not mentioning the fact that Kilbey was also seriously drunk at the time of the accident. His blood alcohol level was more than three times the legal limit, and many experts are convinced that it was alcohol, not marijuana, that was mainly responsible for his severe driver impairment.

Issues with Detection of DUID

Another problem involves detection. Currently the legal limit for THC in the blood is measured at five nanograms per milliliter, which does set a fixed threshold or benchmark. But the difficulty arises because there is no simple process comparable to the popular breath test for alcohol or Breathalyzer for determining whether someone has unacceptable levels of marijuana in their system.

There is a method of using an oral swab that can be done rather easily and conveniently by a patrol officer on the side of the road. The early indications are that this is an effective way to determine DUID for marijuana, and as it gains credibility the test will likely be used throughout the Denver area in a way that is similar to Breathalyzer use.

There are medical researchers who still suggest that THC can stay in the bloodstream for extended periods of time, though, especially for those who are heavy users of marijuana. Whether that will result in erroneous convictions for DUID remains to be determined, which is another reason why more data over a longer period of time is needed.

Meanwhile law enforcement agencies are taking a proactive approach to train officers and educate drivers. More than 60 state troopers have passed drug recognition certification, for instance, and the Colorado Department of Transportation launched a $1 million public awareness campaign last year. But even after the successful campaign a survey still revealed that about one out of every five recreational pot users did not even know that DUID was illegal.

Nearly half of all marijuana sold legally in Denver is in the form of edibles, too, and that has presented a steep learning curve for many pot users. There are numerous instances, for example, where people ingested many times the recommended amount of THC because they did not realize how much they were eating. Unlike pot that is smoked, ingested edible pot can take up to an hour to start to “kick in” and impact the user. Everyone metabolizes the THC at a different rate, too. But new restrictions on the doses of THC that are sold, coupled with financial incentives to promote lower dose edibles, should help to alleviate much of that potential problem over the coming months.