09Sep 2015 by Jennifer Irvin No Comments 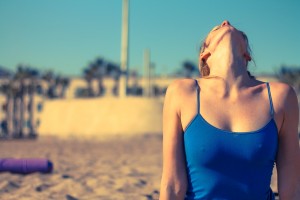 These days, there is a great deal of emphasis on health, wellness, and taking care of our bodies. There is also an emphasis on legal marijuana use—both medicinally and recreationally—in a handful of states, including Colorado. But the fact is that many people don’t consider mixing weed with physical activity, including yoga. Yoga is a form of physical activity that can be challenging and demanding, but also serves as a form of meditation.

Yoga has been considered to be a spiritual experience by many people in different parts of the world for thousands of years. Cannabis use dates back to ancient times. So why not mix yoga and marijuana? If this is something which you have an interest in then why not check out these 10 Best Vape Pens for Cannabis so you can start this experience sooner.

Yogis and pot smokers desire similar things. They search for an awareness that extends beyond themselves and their everyday life. They desire a feeling of bliss and relaxation. They want to spark their creativity and open up their heart to new things. With all of that taken into consideration, it seems to make sense that mixing marijuana and yoga may have the power to achieve even greater levels of bliss, personal reflection, and relaxation.

Often referred to today as Ganja Yoga, the pairing of marijuana and yoga has been evident since at least the medieval era. In the Yoga S?tras, cannabis use and yoga were highly encouraged. Specifically, Sutra 4.1 reads: janma-os?adhi-mantra-tapah? sama?dhi-ja?h? siddhayah?, which translates to “Perfections (are) born from sama?dhi, (as well as from) birth, medicinal herbs, mantra, or austerity.” While these medicinal herbs are not specified, it’s pretty clear that they are not everyday herbs like chamomile or peppermint.

Ganja yoga is a trend that is growing increasingly popular in areas where marijuana use has been legalized. From Denver and San Francisco to Portland and Toronto, Ganja yoga studios have been popping up all over the place. While most of these studios don’t allow yogis to toke up while they are practicing, coming to class directly after smoking is strongly encouraged. In Canada, there are studios that let yogis partake in the form of vaping and edibles. Buying or selling weed in these particular studios is forbidden, though.

It has been said that cannabis can be a tool, and that every tool has aspects that are positive as well as negative. So what are the pros and cons of combining marijuana and yoga?

Advantages of marijuana and yoga

Those who partake in cannabis use find that their focus on one particular thing is greatly enhanced. This may appear as a form of “zoning out,” and in a way, it is exactly that. The fact is that increased focus has the power to enhance meditation and the feeling of being connected to the earth, the ground, and energy in the room. This heightened focus can also allow for deeper awareness of the body and what it needs in the yoga practice.

Marijuana is synonymous with opening the mind to new experiences and challenges. Being high during yoga practice can create a wonderful path for exploring new postures and going deeper in favorite poses. Focusing on the breath is greatly emphasized in yoga, and marijuana helps many yogis hone in their breath in a way that they would not be able to do otherwise.

Relaxation is increased tremendously after smoking marijuana, and research confirms that the reason is due to a decrease in brain activity. Many people who practice yoga find it difficult to relax and quiet their mind, and cannabis certainly helps to calm the thoughts in the head. Those who deal with some form of chronic pain find relief from cannabis use, and this allows them to participate in physical activities that they could not do otherwise.

Disadvantages of marijuana and yoga

Not everyone is a fan of partaking in cannabis before their yoga practice. Some believe that marijuana prohibits the mind to focus and limits clarity in thinking. Others say that yoga involves an awareness that needs to come from within and without the use of any outside stimuli. Some also argue that most yoga poses are challenging enough without marijuana being in the picture. Many toking yogis also experience dizziness and lightheadedness during poses if they smoke right before practice.

It’s clear that many yoga practitioners regard cannabis use and yoga as going hand-in-hand in heightening their awareness and complementing their practice. However, it’s recommended that yogis get accustomed to yoga poses and fine-tune their practice before incorporating marijuana into their yoga experience.