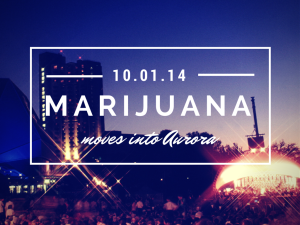 Since recreational sales of marijuana kicked off in Aurora in October 2014, the city has seen a steady growth in sales tax revenues.  Preliminary numbers from November through January show increases every month as new stores have opened their doors.  There are now seven stores selling recreational marijuana in Aurora out of 23 that have been licensed across the six wards.  In November, with only two stores operating, $12,564 was earned in sales taxes.  By December, with four stores open, the number jumped to $36,320 and in January, with six stores in business, the number grew to $67,657.

Gayle Jetchick, who is the executive director of the Havana Business Improvement District, thinks “Aurora did it right” with the rollout of recreational marijuana.  Along the Havana corridor, which is part of wards three and four, there is one store open and another coming soon.  “We’ve had no problems at all.”  Jetchick thinks part of the reason the introduction of marijuana into Aurora has been seamless is because the community took it’s time.  “It was a good year and a half as they tried to work through it and write the ordnance. They looked at everything and asked questions beforehand and they had that moratorium in place for several months before they let the shops open.  They had all their ducks in a row.”  Jetchick feels the extra caution helped the rollout go smoothly and calm concerns of neighbors.

Sally Mounier is the council member for Ward one which is urban Aurora.  35% of her constituents are foreign born and 62% are renters.  It’s a very diverse and fluid district.  Her ward has two stores with a third opening soon.  “I have to be honest, we have two open and you wouldn’t even know. We’ve had absolutely no complaints, no problems, no issues with police or fire, no issues with noise, no issues with smell, nothing.  It’s like they opened up a florist shop.”  Mounier credits Aurora with understanding the needs of businesses.  “We are all about making it good for your business in Aurora.  We want them to succeed.”

Jetchick says the marijuana businesses in Aurora are adding value to the area.  She says Medicine Man put $650,000 into an old Arby’s and now it looks like a doctor’s office.  Lightshade is gutting an old gas station and used car dealership and totally remodeling.  “They’re investing back into the community and keeping these old buildings up.”  Jetchick says the new businesses are keeping their places clean, keeping the noise down and there has been no uptick in crime.

Although Jetchick does catch an occasional whiff when she has her windows down, she is hopeful that the new businesses will continue to help drive up the increasing property values that she is seeing along Havana Street.  Mounier echoes Jetchick’s optimism.  In the past six weeks she has had four different restaurants approach her about opening in her neck of urban Aurora.  She says the marijuana establishments are not having any negative impact on those who want to open the doors of new businesses in her community.

So far city leaders are taking a conservative approach with the new revenues flowing in from marijuana sales.  Jetchick, who sits on Aurora’s budget committee, says the sales tax money is going into a separate line item in the city general fund and once leaders have a handle on how much is really coming in they will allocate it to the city budget.  Jetchick says it could be a year and a half before they figure out how much the program is costing them for enforcement.  Because of this there are no decisions yet on how to spend the money or on a timetable for using the funds.  One idea that is being considered by city leaders is to help fund non-profits.  Aurora’s non-profits receive revenue from red light cameras.  Should Aurora get rid of the cameras, which have been upsetting to motorists, marijuana revenue could fill the void.

As far as challenges to Colorado’s marijuana industry working their way to the courts, Mounier doesn’t lose sleep over it.  “The marijuana industry itself is going to go national.  I don’t see that there is any stopping.  This business has got legs.  We’ve proven you can do it.  You can open up retail shops and not have the world collapse around you.”  Mounier adds that if the voters want it other communities should look to Aurora to get it right.  She’s so bullish on the business she has encouraged her grown granddaughter to get involved.  “It’s a new business.  She could get in on the ground floor and move up.  It’s an opportunity.”