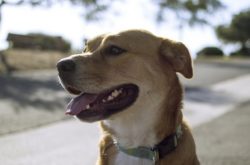 With the movement of legalized medical marijuana use sweeping across the country, it is no wonder why many pet owners are asking if some of the products proven useful in human medicine may also hold some benefit for our canine companions that are battling chronic diseases as well. Many pet owners are experimenting with one form of medical marijuana, CBD oil, in their own animals, with and without veterinary counsel. While few educated pet owners would feed their beloved pets marijuana itself, CBD oil is considered to be a safer derivative of marijuana and hemp which contains little to no THC, the psychoactive component of marijuana that causes both people and animals to feel “high.”

CBD oil contains cannabinoids which act on endocannabinoid receptors located throughout the nervous system. By these mechanisms, cannabinoids can downregulate the neural transmissions that are involved in the various pathways that cause us to feel pain, anxiety, sense noise, and in the development of nausea and vomiting.

While proponents of CBD oil rave of it’s healing properties without some of the less desirable side effects more conventional treatments can cause, skeptics are concerned about lack of information and potential toxicity.  Even for critics, it would seem there are an endless list of possible uses in terms of treating various conditions encountered in small animal medicine.

Conventional oncology treatments in pets are similar to human medicine and include surgery, chemotherapy, and radiation. There are several reports in the news and media about pet owners who have had animals diagnosed with metastatic or terminal cancer who resorted to CBD oil when traditional therapy was not working and claim that it significantly improved their animal’s quality of life. Some of the potential benefits include increased appetite, less nausea and vomiting, and improved energy levels and mobility. From a scientific standpoint, some studies in human medicine have shown that the cannabinoids found in CBC oil can have antitumor properties that not only aid in improving symptoms, but may significantly inhibit tumor cell growth and even cause certain cancers to regress. While no such studies have been conducted in veterinary medicine, it certainly warrants a closer look at CBD oil as an adjunctive cancer treatment.

CBD oil may also be very beneficial in controlling pain that is seen with a wide variety of orthopedic and neurological conditions, without all the negative side effects of more traditional treatments such as NSAIDS, opioids, and other analgesics. These drugs cannot only be costly, but can cause significant liver or kidney damage, and cannot be used in cases where organ function is not intact.

There are a variety of behavioral conditions (separation anxiety and noise phobias probably being the most common) that can be incredibly frustrating to deal with, both from the position of the owner and the veterinarian treating their pet. CBD oil may provide a calming and alternative treatment when training and conventional behavioral medications are less than helpful.

CBD oil may improve appetite and lessen chronic vomiting and diarrhea in conditions such as inflammatory bowel disease in which immune suppressive drugs and expensive prescription diets are often the mainstay of therapy. In both humans and animals alike, CBD oil is being used in cases where epileptic patients are either not responding to conventional treatments or when side effects from those therapies are incompatible with a good quality of life. Unlike traditional epilepsy medications such as phenobarbital and potassium bromide, CBD oil is not known to cause liver enzyme elevation, increased thirst and urination, and unwanted weight gain that are commonly observed many anti-seizure drugs.

After such a long list of the possible positive uses for CBD oil, how can there still be indecision about whether or not CBD oil containing products are beneficial in dogs? The answer is very simple. There have been very few to virtually no studies done in companion animals regarding the short or long-term effects of CBD oil use. In fact, there is really not even enough information available to help to determine what a therapeutic dose might be versus a toxic dose.

Toxic effects could potentially occur from an overdose of CBD oil itself, or if the type of CBD oil being used contained a higher level of THC than what is expected. Several states now have legalized even recreational use of marijuana, and in these states marijuana toxicity in pets has increased by as much as four to five times compared to past statistics.

Ingestion of marijuana in dogs can produce clinical signs as mild as drooling and lethargy to profound coma and death. One of the biggest factors in the increased number of toxicities in dogs is increased production of marijuana containing foods.

CBD oil itself should be less toxic compared to marijuana itself since it is supposed to be devoid of or containing very small amounts of THC. However, given the range of sizes when considering different dog breeds or even cats, determining an actual dose that is both therapeutic and nontoxic can be difficult.

Of great significance is the lack of oversight in terms of labeling cannabis products. How do you know what amount of CBD oil is in a treat, or what other ingredients are present in a tincture? Can we trust the companies that manufacture these products if there is no or little government regulation? That is a problem commonly encountered when using any homeopathic treatment as most vitamins, minerals, and herbs are not federally regulated in the same capacity as pharmaceutical drugs.

Above all, many people think that if something is natural it is safe regardless of the dose given, but even water can be toxic in both humans and animals if an excessive amount is consumed. CBD oil is not exempt from this phenomenon.

Part of the dilemma in providing research in this area is that marijuana and its derivatives have long been classified as a schedule I controlled substance, the most restrictive category applied by the federal government, and for that reason, significant regulatory hurdles prevent more research from being conducted. While numerous health organizations are petitioning for the reclassification of the drug, until this occurs, further research in veterinary medicine in particular is unlikely to occur.

Most pet owners also do not realize that as a result of the scheduling classification, veterinarians are unable to legally prescribe schedule I drugs to patients regardless of state law (unlike regular physicians). As a veterinarian myself, this means I cannot recommend CBD oil for dogs even in cases where traditional therapy has failed, for hospice patients, or prior to considering humane euthanasia. However just because I cannot professionally authorize use of medical marijuana in animals, does not mean I—or others like myself—should completely discount the potential benefits it may have in terms of treating chronic illness in pets.   If you’re interested in giving it a try, companies like Canna-Pet sell capsules that contain a broad spectrum of naturally occurring cannabinoids, terpenes and flavonoids from hemp for dogs. Learn more about giving your pets hemp oil in this book.

Perhaps a neutral but progressive stance would be to remain open to the reports pet owners have come forward with, while cautioning believers from thinking that medical marijuana is a complete cure-all that poses no potential threat. In the very least, veterinarians should have an interest in future research in this area, and advocate for controlled clinical trials that would increase our understanding of the positive and negative aspects of medical marijuana as a therapeutic tool in companion animal medicine.