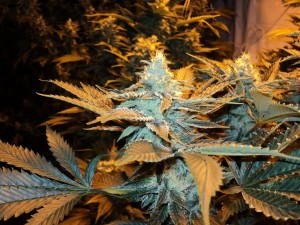 Alien OG is a strain that has been growing in popularity as of late. When I went to my local dispensary, I noticed that it was being offered and I had yet to try it. Being in a medical state, I have access to a lot of really wonderful strains, but I had not been lucky enough to come across Alien OG until about two weeks ago. Of course, I had to buy some flowers and some concentrate to give this hyped strain a try.

Both the flowers and the concentrate smelled pretty skunky when I opened the containers. There was a slight pine undertone to the scent. It had a deep green color with a lot of nice, juicy crystals in each nugget of herb. The concentrate was more of a blonde tone, but it smelled really strong for oil. After using it, I had a nice head rush along with a really great body high. It was a great combination of indica and sativa, which made me understand the recent craze for it. Out of the numerous strains that I have tried, I would rate it among the top five.

Being a fairly potent hybrid strain, Alien OG is THC-rich with potency margins of about 20-28%. It is a cross between Tahoe OG and Alien Kush, thus the name Alien OG. It is a leafy plant with silver crystals. Before harvest, it is a nice shade of medium to dark green. The nugs wouldn’t suggest that, though. There are a lot of dark yellowish-brown pieces that run through a bud once it is properly harvested for the particular phenotype that I received. This darkness of this brownish-gold fleck may vary from plant to plant. 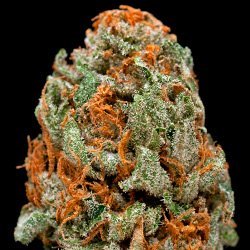 Alien OG concentrate has a very strong, pungent aroma that is hard to describe. It sort of smells like a cross between freshly wet mud, moss, and pine. These smells are all quite strong for concentrates, as most do not have a strong odor. Buds also have this aroma, but it takes on an earthier smell that seems to be much more pleasing to the olfactory organs. As far as smell goes, I much prefer the smell of the buds to the smell of concentrates.

When it comes to taste, however, I prefer the concentrated form. Alien OG is a very pungent strain that leaves you with severe dry mouth. Your throat will feel dry and waxy. For this reason, I preferred to use only a little bit rather than a lot. Since concentrates are done in small amounts, it seemed to be a lot more palatable. When you smoke the herb form, you do unlock the sweet undertones a little more. The cotton mouth, in my opinion, is not worth the slight complexity in flavor that the bud offers.

Alien OG hits the user nearly immediately. I felt a nice balance of a body and head high. This combination allowed me to feel quite content and able to enjoy my day even though I had been a bit grumpy prior to smoking it. The happy feeling lasts quite a long time, which is probably the most noticeable effect of Alien OG.

The level of relaxation that Alien OG allows the user to feel is absolutely incredible. I was really in a sticky situation with a deadline when I decided to smoke in order to calm myself down and focus on my work. After removing the stress from the situation, I felt able to do my work and maintain elevated mood levels until I finished.

Alien OG, being a hybrid, helps treat headaches due to the head high, and addresses any other pain due to the body high. I suffer from chronic back pain and chronic headaches and I found that it effectively treated both.

I felt incredibly sleepy after using this strain, which can be both good and bad. This property seems to come and go, though, depending on one’s mood. When I was only a wee bit tired, I smoked it and I immediately felt the need to go take a nap. When I was completely awake, I was able to enjoy the body high and head high without interruption from any fatigue.

Alien OG has antidepressant and anti-anxiety properties, which makes it a perfect candidate to fight PTSD, anxiety, and depression. It packs the good punch of euphoria, giving the user the uplifted feeling they desire when feeling down.

The hybrid is able to tackle both head pain and body pain. Many strains are incapable of taking care of both. If you suffer from chronic pain of both the head and back, like I do, this may be the medicine you need.

Alien OG, when used if fatigued, can help get the user to sleep much faster. It is a long-lasting high, which assures deep sleep and helps the user refrain from tossing and turning after the medicine wears off.

Alien OG is notorious for giving me dry mouth, and everyone else that I know. If you plan on using Alien OG, I highly recommend you keep a glass of water and some gum or sucking candy nearby, because you’re going to need it to combat the cotton mouth.

Alien OG gives me the worst dry eyes I have ever had. They get so dry I have to use eye drops or else it is nearly unbearable. Before you use Alien OG, if you don’t already have eye drops, stop at your local drug store and pick them up. I’ve never smoked a strain that gave me dry eyes as badly as Alien OG does and I have smoked a lot of different strains.

I would smoke Alien OG again—in fact, I’m about to go to the dispensary to get some more before they run out as I write this review. It is very effective for chronic pain and insomnia; I have both, so I have experienced the symptom relief myself. If I had to give it a rating, I would probably put it in the four out of five stars range. While it is really good medicine, dry eyes are really uncomfortable for me due to a corneal injury so it’s a very serious con. However, I would recommend using this strain with eye drops any day. If you are a medical patient that needs help with anxiety, depression, PTSD, insomnia, or chronic pain, I recommend this medicine for you.