When I initially got my hands on the strain, it smelled quite potent and had a lot of crystals. It was quite obviously a hybrid, judging by the appearance, and there was no way to tell what I felt was more dominant until I medicated with it. It was a bit of a creeper, meaning it took awhile to kick in properly, but I felt sativa effects, primarily, with some lovely indica undertones. I felt a slight head high along with enough of a body high to achieve that floating feeling. It was pretty clear why everyone had been fussing over the strain.

Girl Scout Cookies is a cross between the strains Durban Poison and OG Kush. It comes in a number of phenotypes, but the two that you will come across most often are the Platinum phenotype and the Thin Mint phenotype. It is quite frosty and sometimes even appears to be coated in sugar if it of very high quality. Although it looks to be mostly green, you will notice some purple coloration upon further inspection. The color also seems to depend on the phenotype. The plant grows to be about the size of a medium-sized shrub, but the height also is dependent on the phenotype, so it can vary. The strain is also renowned for winning multiple awards at the Cannabis Cup.

Girl Scout Cookies, also known as GSC, has a pretty strong scent when it is in its bud form. I primarily use concentrates, and I’ve noticed that even the concentrate takes on a fairly strong aroma, as far as concentrates go, anyway. This can be explained by its ties to the extremely potent plants, OG Kush and Durban Poison. It smells a little fruity with strong aromatic undertones of diesel and coffee.

The strain has several layers of flavor. Initially, it tastes rather earthy. However, it has a strong, sweet aftertaste. I suppose this is how its name was coined. The flavors are very powerful, but not overbearing in any way. 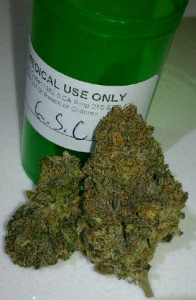 I would say that this is the most noticeable property of this strain. GSC combines the euphoria of a great head high with a body high. This leaves the user feeling calm and happy, but also alert enough to enjoy their euphoric state. I found that it created the same euphoric feeling many indica strains do for me whilst letting me continue to work on a paper, chat, and make dinner. With the way that my body reacts to marijuana, I have found only heavily indica-dominant strains can produce great euphoria for me, but then I have the mental crash of using an indica. Girl Scout Cookies allowed me to avoid the mental crash and produced the euphoria that I desired, so I was very pleased with this psychoactive effect.

This hybrid has enough indica to get rid of any muscular pain that you may have, but there is also enough sativa to keep you active. I use medical marijuana for chronic pain and it helped me the way that I needed without making me feel tired or antisocial.

Being a writer, I really love when I find a strain that I can safely use and still produce quality work. Girl Scout Cookies made me feel quite creative, as it numbed my pain whilst allowing me to stay focused and alert. After running a rather large dab of GSC concentrate through my recycler, I was still able to successfully work on a project for several hours. The strain did slow me down from my average speed, but that is entirely expected.

Girl Scout Cookies has a very uplifting, euphoric effect. This is the reason that the strain can efficiently combat negative feelings that one suffering from depression or anxiety may experience. Considering it is a hybrid, it can relieve both the emotional and physical anguish associated with these chronic issues.

The uplifting psychoactive properties of the strain can help relieve stress. However, it does vary from person to person. I have known some users that claim to experience serious paranoia after using the strain, so proceed with caution. For myself and most others that I know, it does help with stress, but everyone is different, so you should see if you are one of the select few that experience negative effects. Nevertheless, paranoia seems to be rather rare and in its absence, GSC works wonders for severe stress.

If you use marijuana for pain relief but indica strains make you feel fatigued throughout the day, GSC may be a good option for you. It effectively numbs the pain but keeps you awake, allowing you to still partake in daily activity without being in pain.

Some use marijuana to aid a lack of appetite. If you have struggled with eating disorders or need to eat but can’t bring yourself to do so, this strain will certainly help. The munchies that I experience when I use GSC are much more prominent than with many other strains. Since it also keeps you quite alert, you won’t have difficulty cooking or getting up to get a snack after use.

The most noticeable side effect of Girl Scout Cookies is the dry mouth, aka cotton mouth, that you experience after using it. Most concentrates do not give me dry mouth at all, but GSC is one of the few that does. Keep some water and sucking candies nearby to relieve yourself of this side effect.

If you are not medicating to treat a lack of appetite and you are trying to watch your weight, you may be a little displeased with the level of hunger you feel. GSC gives me incredibly serious munchies every time that I use it.

My eyes rarely become bloodshot when I medicate, but they become extremely red every time I use this strain. I recommend picking up some eye drops from your local drug store before indulging. Your eyes will thank you.

I have only personally experienced this once out of the dozens of times that I have used GSC, which is not saying much because I feel slight paranoia with most strains that I have used if I am not in the right mood when I medicate. Nevertheless, I feel that it is worth mentioning because I have met some people that feel it every time that they use the strain. This is not too uncommon with some hybrid strains.

I would certainly smoke Girl Scout Cookies again. I have used it several times and it is more than likely that I will medicate with it again. Despite feeling hungry, having cotton mouth, and experiencing dryness in the eyes, the strain gives me the desired effect and treats my chronic pain without making me entirely immobile. In summation, all the hype that you’ve heard about GSC is well deserving. I highly recommend it to other medical patients and cannabis enthusiasts.