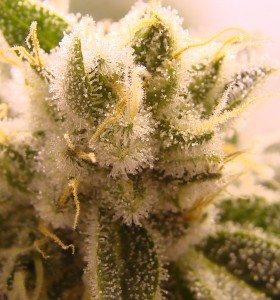 I first found Gorilla Glue #4 in a concentrate form when I went into a medicinal marijuana dispensary in Detroit. I had heard about the indica-dominant hybrid winning first place at the 2014 Cannabis Cup in Los Angeles, but I wasn’t aware that it was also grown in Michigan.

It was very dark in color and had a very strong aroma when I smelled it. It was very clearly indica-dominant, which is what I was seeking. I bought it and took it home. Once I vaporized it, I immediately discovered an array of astonishing psychoactive effects. It was unlike any high that I had ever felt before. It was better.

Gorilla Glue #4, in its plant form, is riddled with beautiful, conical crystals. It is a very frosty strain, which makes it a little sticky. The plant itself is fairly green, but the crystals are more of a light lavender shade. Some crystals are so light that they appear to be white. It tends to grow as a multi-branched plant, but it does not grow very tall. This is fairly common for indica and indica-dominant hybrid strains.

Gorilla Glue #4, in its flower form, has a very strong piney scent. It is said that the strain comes from a combination of Chemsis, Sour Dubb, and Chocolate Diesel. All of these strains have a rather pungent aroma, which may explain Gorilla Glue #4’s heavy aroma.

The strain’s taste is actually quite complex and enjoyable. When I have smoked it in bud form, the flavor seemed to have a little bit more of a mint-chocolate flavor with some light organic undertones. However, when I used the concentrate, I noticed that the chocolate flavor had nearly disappeared. It took on a much more minty flavor, with some undertones of pine and fruit. The depth to the flavor alone was enough to make me want to try it again.

I primarily use concentrates, so I am familiar with very the very strong, euphoric high oftentimes associated with cannabis oil. However, I had not expected Gorilla Glue #4 to produce as much euphoria as it did.

I have chronic back pain and I have yet to find a strain that diminished the pain entirely, but Gorilla Glue #4 came quite close. The dull ache that I usually feel, even after medicating, was virtually gone. Occasionally, I felt a short twinge, but nothing like the pain that I usually experience on a daily basis. I was pleasantly surprised, considering even the most potent of indica strains do not relieve me of the majority of my pain. 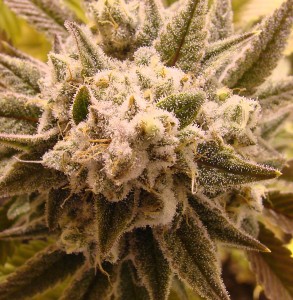 As a writer, I oftentimes feel that my cannabis use can deter me from feeling inspired. Many strains, especially indica-dominant ones, make feel too lazy and too tired to do anything creative. Gorilla Glue #4, on the other hand, somehow made me feel creative, despite feeling quite tired. I wrote several pages in my novel, played some music, and even worked on a piece of artwork that I hadn’t touched in ages.

The hybrid has just the right amount of sativa and indica in it to make the user maintain a certain level of creativity. In my personal experience, I believe that the strain made me feel so euphoric and pain-free that I was able to focus entirely on my ideas. There was not an annoying, dull ache consistently interrupting my creative process. I have yet to find another strain that gives me the same level of creativity as Gorilla Glue #4 did. I have tried a lot of sativa-dominant strains to try and assist my creativity, and none have even remotely compared to this specific strain.

The only possible negative aspect about this strain is that I would not recommend it for daytime use for everyone. It does result in some fatigue, especially if you were a little tired before using. If you tend to fall asleep after using indica-dominant strains, I would only suggest Gorilla Glue #4 for nighttime use. However, if you like to use cannabis to treat insomnia, this strain would work perfectly for you.

Being an indica-dominant hybrid, Gorilla Glue #4 helps relieve the user of pain, whether it be chronic pain or not. It has been the most effective strain that I have used to combat my chronic back pain. It has allegedly helped other medicinal marijuana patients as well.

Gorilla Glue #4 causes many users to become rather fatigued. Combining this property with the level of euphoria it produces, the strain can help temporarily ease the physical symptom of insomnia as well as the psychological symptoms.

The Big Question: Would I Smoke it Again?

I would smoke Gorilla Glue #4 a hundred times over. I look for it every time that I visit a dispensary. From its complex flavor to its unique and blissful high, the strain offers a number of reasons that it deserves a five star rating. Despite making me feel a little fatigued, the strain allowed me to explore my creativity without being in pain. Overall, Gorilla Glue #4 certainly deserved its first place title at the 2014 Cannabis Cup and it has also won a first place title in my heart.