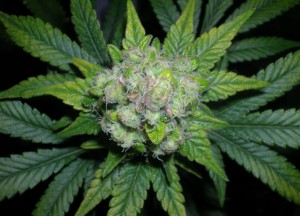 Sour Grapes is a hybrid strain that is commonly confused with the strain Sour Grape. However, they are two entirely different strains. Sour Grapes is also sometimes called “Grape Stomper.” I have been seeing it all over the dispensaries lately, so I figured it was time to give it a try. I picked up some crumble, some shatter, and some bud, just to see how each one differed.

The crumble and the bud smelled really strongly the second I opened the containers. It had the sharp scent of something incredibly sour—similarly to those sour sucking candies that, according to rumor, had to be reformulated because they were banned in the late 1990s. The buds’ crystals were not as shimmery as those of a lot of plants, but it was sticky in the right way. Each nugget was a pretty light, rich, yellow-green color. The shatter turned to a lovely blonde. After trying it, I was pleased to experience a nice, soothing body high along with the head rush one craves from a sativa. I would rank it within my top twenty strains after using it in the three aforementioned forms.

Sour Grapes is a sativa dominant plant, resulting in a yellow-green color with lots of small, dully-colored crystals when it is harvested. Before harvest, it takes on a deeper, darker green shade. The leaves open widely and its parent strains are Purple Elephant, Purple Urkle, and Chemdog Sour Diesel. It is commonly referred to as a “craft strain.” 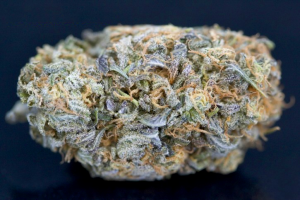 Sour Grapes has a strong, sour and fruity smell in both the nug and the crumble form. The shatter did not smell as strongly, which is fairly common for most strains. I noticed the nug smelled sweeter than the crumble. The crumble smelled like the bottom of a bag of sour candy. There is a pungent, sour aroma that makes your nose tingle as soon as it hits your olfactory glands. The smell of the crumble is actually preferable to the smell of the nuggets, though. I say this only because it is more true to the strain’s flavor.

The bud also tasted sweeter than the crumble did. The crumble tasted like an artificially flavored sour grape candy. It honestly tasted like nothing I’d ever tasted in nature. Nevertheless, it was quite enjoyable. If you are interested in smoking candy, Sour Grapes is probably for you.

Sour Grapes sneaks up on the user, but it is so enjoyable when it does. I noticed that the wax affected me more slowly than the flowers did, but it obviously hit much harder as concentrates do. I felt the lovely head rush of a sativa dominant plant and the nice relaxing effects of a body high.

Sour Grapes is a strain that invokes deep, deep relaxation. This results in the best stress relief imaginable. I believe this is due to the unique sativa dominant features along with the strong body high.

Although Sour Grapes is sativa dominant, I still felt incredibly sleepy. Each time I used the strain, I took a nap shortly afterward.

As a sufferer of chronic pain, I must say that Sour Grapes relieved my symptoms rather well. I had the body high that I desired, and after a little cat nap, I was still feeling well-medicated and able to function.

Since Sour Grapes creates strong feelings of euphoria, it is a great plant to use for depression, anxiety, or PTSD.

This one is for the ladies—yes, girls. It can help cure you of those pesky menstrual cramps. It worked phenomenally well for me when I was struggling, and I would recommend it to treat every PMS symptom I can name.

Sour Grapes combated my pain really well. I suffer from chronic back pain and leg pain, due to some injuries I’ve sustained over my lifetime. It cured me of any nasty twinges I would usually have and the effects were quite long-lasting.

Whenever I use Sour Grapes, I have the strongest urge to nap. Whenever I am struggling to get to sleep, I reach for this strain. It is odd, because it is a sativa dominant hybrid, but it still makes me quite sleepy. I have noticed it in fellow users of the strain.

This con is a positive if you’re trying to get to sleep, but it is a negative if you plan on using it to go out and do something. I noticed that I still felt quite a buzz and a head rush when I woke up, but I still needed to stop and take a nap before doing much of anything.

I get terrible dry eyes with Sour Grapes. I rarely get red eyes at all, but I use eye drops every time I use this strain. The only strain that has given me dry eyes worse than Sour Grapes is Alien OG. The level of dryness is quite comparable, though.

Sour Grapes always gives me “the munchies” right before I want to go to sleep. However, they go away after I have had a short nap. The feeling of hunger is not strong enough that one couldn’t ignore it.

I would smoke Sour Grapes again. Actually, as I write this, I am preparing myself to medicate with that very strain to assure that I get to bed. I’ve noticed that it helps treat my pain, my insomnia, and even my PMS symptoms. I would rate it as four out of five stars. The dry eyes are rather uncomfortable, but easily treatable with eye drops. I wouldn’t recommend smoking it before you plan on going anywhere, because it can make you rather sleepy, but I would recommend it for a lot of other reasons including as treatment for PTSD and anxiety.