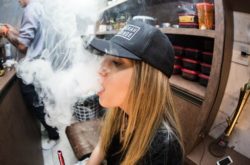 Vaporizing medical cannabis is becoming the popular choice of consumption method among patients with a medical marijuana card to treat pain or another medical condition.

What is vaporizing? It’s a method of heating dried cannabis or CBD oil before it reaches combustion point.   It makes use of a vaporizer that heats up the herb so that it can release the needed cannabinoids without the patient being exposed to the byproducts associated with smoking.

But then, what are the benefits of vaporizing cannabis? Check them out in the following.

Pain relief is by far one of the most significant benefits of cannabis.

Vaporizing it, the patient prevents turning the medicinal properties of cannabis into waste by putting a lighter to it.

Plus, smoking doesn’t only expose medical marijuana patients to the smoke it creates but also diminishes the cannabinoid content that aids in faster pain relief.

But vaporizing prevents it from happening, as it heats up the herb before it reaches combustion point.

Using this method of administration, you’ll receive a much faster and efficient delivery of needed cannabinoids for pain relief.

As when you vaporize the plant, you can inhale about 95% of the cannabinoids with the healing and pain-relieving properties that can make you feel better.

And the onset of pain relief is also quicker when vaporizing because of the pure vapor containing cannabinoids that can be absorbed faster by the lungs.  With that said, patients feel faster pain relief than with smoking.

In fact, vaping medical cannabis can deliver relief within minutes while also allowing patients to control their dose more effectively because they won’t have to wait long for the effects to kick in.

Finally, a study also concluded that vaporizing showed the least side effects versus other intake methods, such as smoking.

Summing up, vaporizing medical cannabis can give you faster pain relief and with high efficiency versus smoking does.

This point is probably one of the biggest concerns in smoking that kills more than 450,000 people in the US annually.

Vaporizing cannabis, patients don’t have to be exposed to the harmful toxins and carcinogens in smoke because it only emits vapor substance early in the gas phase and at a lower temperature.

It is one of the reasons doctors recommend vaporizing to patients with a medical marijuana card that want to consume medical cannabis to treat various health conditions including arthritis and joint pain.

Particularly among patients that cannot smoke due to throat or lung problems, they choose to vaporize over other methods, such as consuming edibles, which deliver varying effects from one person to another due to unpredictable effects. Many also have the tendency to overdo for waiting too long for the edibles’ effects to kick in.

That’s different with vaporizing because it lets people control their dose more effectively due to the faster onset of effects so they can stop once they feel satisfied.

While vape devices can be costly, they still are great money savers if talking about the efficient experience that vaporizing can deliver.  For example, smoking converts less than 25% of the available THC whereas vaporizing converts 46% of it.

With more of the healing compounds delivered, it can be safe to say that vaporizing is still the more cost-effective route of administering medical cannabis because less of it is required for the pain relief or desired experience.

More on efficiency, this source also revealed that smoking wastes cannabis because it destroys 50% of the MMJ   upon combustion. But that’s not all because you also lose up to 20% of its medical compounds due to smoke burn off.

Without even saying, smoking is the lowest cannabis delivery methods, which also translates to more spending. Needless to say, the efficiency of vaporizing also equals to less cannabis consumed and more savings for you.

There you have the amazing benefits of vaporizing medical cannabis. Obviously, it is more cost-effective and efficient route in delivering the healing and medicinal compounds of the herb to the body that can also absorb them for faster pain relief.   So while spending on a high quality vaporizer can be costly, it still appears to be the better alternative to consuming cannabis among medical marijuana patients that want to treat pain or recover from their condition using medical cannabis.