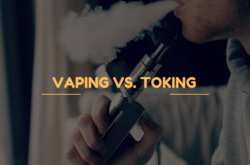 Having a smoke is a recreational pursuit for many people, yet in these days where tobacco is frowned upon and banned in most public places, it can be difficult to get your hit. That’s even more of a problem if, like many of us, you like to smoke a bit of weed. Toking has never been legal, but many people like to enjoy it in private, and that’s still the case.

The rise of e-cigarettes and vaping mods in recent years has given a new method of getting your chosen fix. Whereas vaping weed was once a difficult process that involved the use of expensive, high-tech equipment, you can now get your hands on  vape mods that will easily and effectively help you vape marijuana, and many people are doing so.

Furthermore, with many states now having legalised medical marijuana – and a few now allowing it as a recreational drug – the vaping option is becoming more popular. What are the advantages to vaping, and why are people choosing it as the way to smoke weed? Let’s have a look at what it’s all about.

There are in fact a number of benefits to vaping – applying to both tobacco and marijuana – so let’s start with the basics. Vaping differs from smoking in that you are not burning anything. There is no smoke, so to speak. All that you produce is vapour, so it is much safer both for you, and for others around you.

Many people vape flavoured e-liquids; these come in a wide variety of flavours and can replicate the tobacco flavour your are familiar with, or you can choose from something completely different. Suppliers such as Canada Ejuice – the biggest manufacturer of e-liquids in the country – have a massive range of options, plus they can supply you with all the equipment you need.

Back to vaping weed, and there is a major benefit to not actually burning the marijuana. Instead of burning it – which in the traditional method of smoking is the way things happen – the  vaporizer heats up the weed and produces a vapour from it. This means you will not be inhaling the dangerous carcinogens that you get when you burn the marijuana, but you still get the effect.

Also, the smell of smoking weed is eliminated – so if you want to keep it quiet you can – and there is less irritation of the lungs through tar and smoke inhalation. So, to put it simply, vaping is safer all round, just as effective, and doesn’t harm those around you.

What Type of Vaporizer?

There are a number of different types of vaporizer than can be used to vape both marijuana and a wide variety of oils and liquids. If you are intending to vape marijuana in its standard form, what you need to look for is a Dry Herb Vaporizer. These heat the marijuana to the right level to produce the vapour as required.

If you are planning on vaping oil, then we recommend you check out vape pens. These have the advantage of being portable – they are so named as they are shaped like a pen – and also discreet, plus they are simple to use. You can purchase your oils from many different suppliers, such as Canada EJuice as we have mentioned, and enjoy your marijuana hit to the full.

With the benefit of reducing the harmful elements of smoking, and the availability of a wide variety of vaping devices, it is clear why many people are choosing to vape marijuana and other substances, rather than smoke. Why not check it out and give it a go?