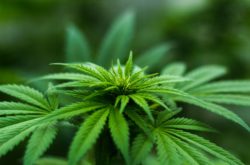 Vertical farming has officially been a “thing” since 1915, though some scholars theorize that the Hanging Gardens of Babylon were built on a kind of hydroponic technology as early as around 600 to 500 BC. While it’s far from a new concept, more and more people are beginning to believe that the world needs vertical-farming solutions now more than ever, as the world’s population continues to grow. And with good reason, cannabis growers are turning to vertical solutions for cultivating their own special crops as well.

Vertical farming, simply put, is the practice of stacking crops and produce one on top of the other, rather than growing them horizontally (i.e., in the ground). There are simple vertical gardens that are basically pots of soil stacked on top of each other, and they’re wonderful solutions for greening up otherwise concrete-filled gray spaces.

However, many a discerning cannabis grower in the business of vertical solutions often opts for hydroponic, aeroponic, or even aquaponic stacks for the highest and most consistent yield, all of which this article will talk about later on.

But First, the Legal Stuff

Recreational cannabis is legal only in nine states, that’s why there’s a need to make sure that your bodies steer clear from cannabis traces. Before you get started, it’s probably a good idea to make sure that it’s legal to grow cannabis in your state. Plus, there are a lot of different rules regarding growing your own cannabis in every state.

In many states where marijuana has been decriminalized (but not legalized), cultivation is allowed for medical use only. Make sure you have your permits.

The Pros and Cons of Vertical Cannabis Farms

On a global scale, vertical farming in the context of agriculture and food production is said to be beneficial to the environment as well as for the economy in a number of different ways. For the budding (pun intended) marijuana grower living in the city, the main argument for vertical cannabis farming is that it doesn’t take up a whole lot of space. Many vertical growing systems allow you to grow several plants in a single walk-in closet.

The biggest downside to hydroponic, aeroponic, and aquaponic systems is the cost. While there are some inexpensive kits to get you started on hydroponic farming, the most basic hydroponic towers can set you back around two hundred dollars.

Upkeep can also be quite expensive, as many cannabis farmers grow their crops indoors and so must keep LED lights on for long stretches of time—as long as twenty-four hours of light in the vegetative stage and twelve hours in flowering. That being said, vertical cannabis farming does result in higher yields and also extends your cannabis growing cycle, allowing for an extra growing cycle per year.

There are three types of vertical farming solutions you’re going to want to look at: hydroponic, aeroponic, and aquaponic farming. You’ve probably already heard of hydroponics and hydroponic weed. Hydroponic weed, which is reportedly more fragrant and has stronger effects than bush weed does, dates all the way back to the 1970s, when history suggests that a group of Hawaiian cannabis growers first discovered the benefits of soilless marijuana cultivation.

Simply put, hydroponic farming is the method of growing plants without soil. The plants are instead suspended in sand, clay, peat, and a number of different materials. Nutrients are then mixed into water and applied directly onto the roots. There are a handful of hydroponic systems accessible to cannabis growers, such as deep water culture systems and drip systems.

Deep water culture is the most basic type of hydroponic system and ideal for beginners. It’s cost-effective and pretty straightforward. Each plant is put in a separate container or pot, and each pot is put in a grow tray, which is put in water.

Deep water culture systems have air pumps that keep oxygen running through the water, and you mix nutrients in the water, which are then carried into the soil. In this setup, the roots can still breathe because the air pump is constantly supplying them with oxygen.

Aeroponics is a vertical farming solution that uses air pumps to spray oxygenated water straight into the exposed roots of your crop (in this case, cannabis). It’s by far the most efficient vertical-farming system in terms of water consumption, though it can be costlier than most hydroponic systems for cannabis growing.

Aquaponics is hydroponics and aquaculture (growing fish in tanks) combined. It’s a system that creates its own little ecosystem; you grow fish in a tank, and the nutrients they produce (i.e., their poop) feed the plants in the grower trays on top of these tanks. In turn, the cannabis roots filter the water for your fish, so everyone’s a happy camper.

Aquaponics are great for people who want to farm ornamental or edible fish as well as grow cannabis at the same time. The best fish for aquaponics farms are hardier types—species that don’t mind crowding. Fish like koi, goldfish, and tilapia are common, but other aquatic creatures like shrimp and prawns can be used for aquaponic farms too.

The important thing to remember about aquaponics for cannabis growing is that, for quality grow, you need a setup with high nutrient levels. The more fish, the better. And make sure that you have a good bacteria colony to help convert the fish waste into nutrients for your plants.

There are any number of vertical farming systems available to cannabis growers on the market today. There’s no dearth of cannabis expos and conferences for the curious and enterprising, and there’s always free and readily available information on the internet.

If you’re thinking about starting your own vertical cannabis farm, remember to consider your space, energy use, vertical farm setup, and lighting solutions for your crops. It’s not a bad idea to bone up on your botany either.