Recently, I tried a strain I hadn’t actually heard much about before. I told my caregiver that I needed something that was more of an indica because I was having more back pains than usual. That was when he suggested that I pick up this concentrate of something called 9 Pound Hammer.

The concentrate itself was really dark, or brunette, if you will. It had a denser consistency, like brunettes tend to have. It reeked of diesel but also smelled a little sweet. It was one of the harshest smelling concentrates that I had ever smelled, but that is common for really good indicas, so I just took that as a good sign. After I smoked it, I immediately understood why it was called 9 Pound Hammer. It hit me instantaneously, and it showed. This was not going to be a strain to use before trying to go anywhere or do anything.

9 Pound Hammer is 80% indica, giving it a really striking violet color. It smells sweet and sour at the same time and it’s the most resinous stuff I’ve ever seen in my life. The strain was bred by TGA Genetics and is a cross between Hells OG, Goo Berry, and Jack the Ripper. It’s sort of a shrubby plant, but the crystals are quite pristine and beautiful. 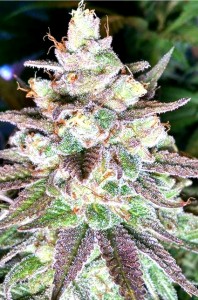 It smells really strong and sour, which is also sort of what it tastes like. The flavors are reminiscent of berries with a weird citrus aftertaste. It isn’t necessarily a bad aftertaste, but the last thing you want is citrus when you have the worst cottonmouth ever, which is, by the way, what I experienced after trying the concentrate for the first time. Nevertheless, after a glass of water, it subsided pretty quickly.

The indica works sort of like a heavy downer, making you really lethargic and happy. Everything seems quite light and humorous, and the feeling lasts for quite awhile. I would say that this is the dominant property of the strain.

I have been struggling with severe back and leg pain for weeks. I had tried a number of different strains that had been available, including Girl Scout Cookies, Alien OG, and some others, but I just couldn’t find anything at the dispensary that was helping. Finally, when my caregiver gave me this, I was pain free! This is the sign of a good indica-dominant at work. The concentrate was even comparable to the strength of some prescription painkillers. I was pleasantly surprised.

If you have a hard time sleeping, 9 Pound Hammer might be for you. I had been struggling to sleep, partially due to pain, partially just because I’m a freelance writer that is always awake, typing away on my keyboard. Either way, I couldn’t sleep. After I got a hold of this strain, I slept and not only did I sleep, but I slept for an entire eight hours.

The biggest downside of 9 Pound Hammer was the munchies that it gave me. My significant other is also a medical patient and he had the same problem. Word to the wise: if you’re going to get some 9 Pound Hammer, get some carrot sticks so you have something healthy to much on. Who am I kidding? Get a few sleeves of Oreos. You’ll need them.

If you struggle with depression or anxiety, I would strongly recommend this strain. The strong sense of euphoria that you experience lasts for many hours, and if you use a concentrate, it can last all day.

I struggle with chronic back pain, and 9 Pound Hammer cured me of it. In its concentrated form, it is comparable to a minor opiate (but not as harmful!) and in the flower form, it worked quite a bit better than alternative self-care. Since it is mostly an indica, it numbs the body.

While this was a downside for me, if you struggle from a lack of appetite, this strain might be perfect for you. It made me hungry for about an hour. Luckily, it was not too long-lasting.

Almost immediately, I had dry mouth from this strain. However, it did not last long, so it really isn’t that big of a deal. Just keep a glass of water nearby.

For the first hour or so, 9 Pound Hammer made me quite hungry. It wasn’t just me either, because my significant other had the same exact reaction. In fact, we ate an entire package of Oreos together. However, this can be a positive if you struggle eating throughout the day.

My eyes became rather bloodshot, but this didn’t last long either. I used some eye drops and they felt much better. If you struggle with dry eyes and find them to be extra uncomfortable, go to your local drug store and pick up some eye drops before using this strain.

I would definitely use 9 Pound Hammer again. In fact, I actually asked my caregiver if he would set some aside for me for today. It cured me of my back pain and allowed me to get my day-to-day responsibilities done without being afflicted with pain even once. If I had to give it a rating, I would give it five out of five stars. Despite the few cons, they are very mild and go away quickly. I’m excited to use it again, and if you decide to try it, you should be excited too!